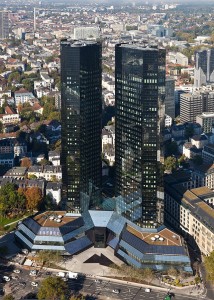 Dated July 21 and published by ESMA on the 30th, the response cited more stable and resilient systems, faster processing of transactions, and lower costs for customers as key benefits. DB also suggested the possibility of banks leveraging distributed ledger technology to make their operational and reporting process flows more efficient and secure and to meet know-your-customer and anti-money laundering requirements.

Signed by Daniel Trinder, Deutsche Bank’s global head of regulatory policy, the response acknowledged that despite the clear possible benefits that could emerge from further development and use of blockchain/distributed ledger technology, potential risks should be understood and mitigated where appropriate.

“To ensure that there is an appropriate balance between allowing for innovation and exploration of the applications of this new technology and managing risks, it is essential that there is (a) ongoing dialogue between industry and regulators and (b) that there is no precipitous move to regulate this area of potential growth and innovation,” said the response. “A proportionate approach should be taken to the development of any proposals for future regulation in this area, in order to ensure a level playing field for all participants and to support continued investment in innovation.”

The document noted that as part of the digital element of its “Strategy 2020,” DB announced the launch of innovation labs, which will help the financial institution apply new technologies for international centers of innovation and to enhance its processes, products, and services. Under this initiative, one part where there has been early focus is exploring the possible commercial application of blockchain and distributed ledger technologies.

The responses said that in light of early analysis Deutsche Bank conducted, there are several areas where the bank sees potential for the application of this technology:

“In addition to these specific applications, the introduction of distributed ledger technology has the potential to allow for more fundamental changes to pre and post trade work flows within banks with additional efficiency benefits flowing from that,” said the document. “Whilst there are clearly a wide range of potentially valuable applications of distributed ledger technology, most of these are still at an early stage of development. Which of these potential applications will turn out to be scalable and sustainable remains to be seen.”

As for managing risks of emerging technology, DB said it welcomed that several regulatory bodies have examined the use and possible risks associated with digital currency. The bank welcomed recommendations the Financial Action Task Force (FATF) made to monitor digital currency exchanges and gateways to tackle risks connected to digital currencies. DB added that it would fully support the observations FATF made that all digital currencies exchanges should be registered and licensed and subject to the same scrutiny as other financial institutions.

But outside the digital currency sphere, Deutsche Bank said it is important that in looking to mitigate possible risks emerging from new application of blockchain/distributed ledger technology, there should be a proportionate approach taken and that an appropriate balance is reached between dealing with emerging risks and offering predictability for investment and space for continued innovation.

In DB’s view, the most effective manner of making sure this is achieved will be: