This is the first part of the two-part company profile. 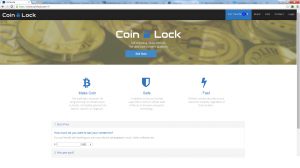 Coinlock founder Matt Branton boasts his service as “the fastest, easiest, and most secure way to sell digital content online that has ever existed.”

Based in Tampa, Florida, Branton, who built the initial version of Coinlock in July 2013, says he intends to make selling digital goods online entirely frictionless.

“Coinlock is an attempt to unify payment and content delivery in a unique and disruptive way.”

“[Cryptocurrency] Has a lot of room to grow in crowd funded content, dividend models, instant syndication and new ways of encouraging distribution and resell.”

Users set a price for the content they want to sell, whether it be an ebook or music or a video or photography. Users then enter their Bitcoin or altcoin address (Coinlock also allows payment via Litecoin and Dogecoin) and add the files they wish to sell.

Coinlock ensures a safe transaction, using Secure Socket Layer as well as state-of-the-art in-browser encryption technology. As stated on Coinlock’s website, the company will never see a user’s data, and only those to whom a user has shared a link will have access to the user’s download upon payment.

Branton observed major structural issues in developing transactional systems when he began working on Coinlock a year ago. Many of those issues have been addressed, he says, but there remain challenges to elements of the technology. Branton sees user adoption as the biggest issue, and this is something that could take time to develop.

The next step for Coinlock, Branton says, is a WordPress plugin, which would allow users of WordPress to instantly embed and sell content for digital currency.

Branton does not have external funding for Coinlock and is not seeking any at this time; however, he says he will probably pull a round for his “next secret project.”