Named after legendary Polish astronomer Copernicus, Copernic will provide the infrastructure for the future space economy and ecosystem to be built upon, said CSC.

After mentioning that Elon Musk, the legendary founder of SpaceX, Tesla and PayPal recently presented plans at the ICA in Guadalajara outlining the next era of space exploration and the first steps towards colonization, the press release went on to say that Copernic was designed to be a platform for the space colonization era. With a system designed to be functional both on Earth and in space, Copernic, said CSC, plans to provide the ecosystem with an effective and transparent platform for the registration of rights and transfer of value.

Copernic will allow for space “assets” to have an exact, defined value that can be realized and transferred for the first time. CSC will at first create this platform to serve as a framework of transactions between space-related activities here on Earth. It will comprise a current use-case for Copernic to help in the sale of space-related entertainment, music and fashion while allowing for the execution of the projected $300 million Space Center development.

The center said in the release that it concentrates on the verticals the conventional space industry does not, including, especially, the future economy. While other space industry players focus on critical physical goals for space such as transportation, CSC said it plans to develop the industry’s prospective economy through everything from the development of education initiatives, VR entertainment, fashion and wearables. 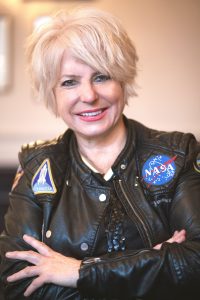 “Now is the time to embrace the limitless possibility of the Space Economy. The economy should not rely on sluggish and inefficient systems that currently dominate earth operations,” said Blaisdell. “Blockchain is rapidly becoming an integral part of the most advanced systems on earth. Just as with rocket technology, the foundation for space’s economy should be based on future standards. Tremendous distance is only one of the many problems that must be solved with a future system; a blockchain with independent integrity is required for the space economy to grow.”

The press release said the potential for transactions in space and between space and Earth is skyrocketing, and Blaisdell thinks of Copernic as a catalyst for future economic growth. CSC also announced in the release that it has engaged the Coinfirm Blockchain Lab, a project from the central European leader in blockchain compliance, Coinfirm, to manage the development of the currency and platform. Although Copernic will not bank on conventional financial system, CSC said risks will have to be palliated. In this regard, Coinfirm will provide its blockchain AML risk and compliance platform to ensure that Copernic is able to establish trust and connect with financial systems on Earth.

“Copernic will be the platform to develop blockchain applications within the space industry,” said the release. “To that end, California Space Center plans to open the first blockchain Laboratory dedicated to space applications, and is now accepting applications from potential partners.”