This is part two of a three-part series of articles about the state of blockchain/distributed ledger technology (DLT) in Europe. The series covers the blockchain scene in some of the most important European nations. I would like to thank PR firm Wachsman for sharing with me the facts & figures and the commentaries present in this series. Part one may be read here.

European British overseas territory Gibraltar and the country of the Republic of Ireland both have a flourishing blockchain space. Below, we’ll be taking a look at their DLT sectors. 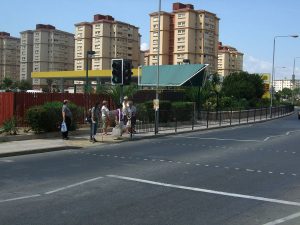 Europort Avenue, Gibraltar. Just across the road from Morrisons (2009). The Gibraltar Stock Exchange is located at Suite 741A
Europort, GSX11 1AA.

To regulate its blockchain sector, Gibraltar has employed a principles-based approach that is built around a core framework of nine principles. The British territory, which has almost complete internal self-governance through a parliament, also offers enough flexibility for DLT projects to succeed. The value-based, industry-informed framework of Gibraltar exemplifies vision and drive functioning autonomously, in which watchdogs and firms work together to deal with sector inefficiencies, fast-track extended processes and enhance citizens’ lives.

Main initiatives of the government of Gibraltar include the introduction of a custom-made blockchain framework in January 2018 and the formation of the New Technologies in Education (NTiE) group. With the framework’s introduction, Gibraltar became the world’s first jurisdiction to introduce such a system. The NTiE group, which signifies a team effort between the government of Gibraltar, the University of Gibraltar and some of the top new technology corporations based in the jurisdiction, is aimed at developing new technology-related education courses about DLT.

Gibraltar Minister for Commerce Hon. Albert Isola M.P. stated, “As the first jurisdiction in the world to introduce a purpose built Distributed-Ledger-Technology (DLT) framework in January 2018, Gibraltar has become home to a wide range of quality blockchain projects that want to be recognised as a licensed provider of DLT. Gibraltar’s supportive business environment and thriving blockchain community are two of the hallmarks of success for our wider economy.”

He added, “As a jurisdiction, we have always prioritised educational development alongside regulatory advances. The launch of the New Technologies in Education (NTiE) group, represents a joint effort between the Gibraltar Government, the University of Gibraltar along with some of the leading new technology companies based in Gibraltar. The NTiE group is geared towards creating new technology-related education courses around blockchain, giving students the chance to broaden their knowledge of the intricate workings of blockchain applications.”

GSX (Gibraltar Stock Exchange) Group Limited founder and managing director Nick Cowan commented, “As a long time advocate for the incorporation of new technologies in financial services, I became convinced of blockchain’s potential to build a new exchange model fit for a new generation of traders and investors. However, the creation of a stable, supportive regulatory environment was always central to this aspiration. The purpose-built legislative framework for businesses that use blockchain or Distributed-Ledger-Technology (DLT) here in Gibraltar has been pivotal in the success of our Gibraltar Blockchain Exchange (GBX), which received its DLT license from the Gibraltar Financial Services Commission (GFSC) in November 2018. Strong engagement between businesses and regulators has helped direct the formation of regulation that provides flexibility for guidelines to evolve alongside the blockchain sector. The DLT regulatory framework continues to provide a road to market for quality projects using DLT.”

The 12.5% corporation tax of Ireland has made it an attractive place for some of the biggest tech corporations in the world, including Apple, Google, Airbnb, LinkedIn and Twitter, who all have their EMEA headquarters located in the country. As a nation with a population of just under 5 million, Ireland has shown that it is able to punch above its weight and seal its place as a worldwide technology powerhouse. The country also hosts some of the most pioneering blockchain startups including multi-award-winning AID:Tech, which revolutionizes how governments, corporates and NGOs provide digital entitlements all over the globe.

The Irish department of finance’s Mai Santamaria said, “Ireland has positioned itself as a leading destination for tech enterprise and research, and has the potential to be a centre of excellence for blockchain and distributed ledger technology. In addition to the growing number of companies using the technology here, the Government has taken several steps to encourage innovation in this sector. Some highlights include, the creation of a €500m Disruptive Technologies Innovation Fund; recently hosting a blockchain hackathon to identify public services business problems that can be solved using blockchain technology; and the founding of BlockchainIreland, a combined effort of Government and Irish-based companies, led by the IDA’s Blockchain Expert Group, to help promote and share information on blockchain in Ireland. Blockchain technologies have the potential to create great economic, social, and technological value and, where possible, Ireland aims to capitalise on this potential.”

The third & final part of this series will review the blockchain scenario in the Netherlands and Switzerland.