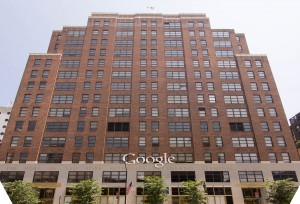 A photograph of the Ninth Avenue façade of 111 Eighth Avenue, in the Chelsea district of Manhattan, New York City. The Jacobs Technion-Cornell Institute is, for now, located at #302, 111 Eighth Avenue. The school will move to its new location on Roosevelt Island in 2017. The building is owned by Google, which donated space in the building to the institute in 2013.

New research from the Jacobs Technion-Cornell Institute argues that bitcoin must be restructured at its very core in order to compete as a mainstream payment system.

“Bitcoin is soon going to reach the limits of its transactional throughput,” said Ari Juels, a co-founder of the institute’s Initiative for CrytpoCurrencies and Contracts, in a Cornell Tech news post (the paper is available for download from the article).

The digital currency can only handle seven transactions per second, while Visa processes between 2,000 and 3,000 transactions, and is able to handle as many as 56,000. With bitcoin anticipated to reach its limit within the next year, the digital currency community is undergoing what Juels calls an acrimonious “holy war,” debating how much the block size can be increasing without destabilizing the system.

The researchers found that a block could increase from its current size of one megabyte to four, at most, before it would compromise bitcoin’s decentralized model. However, even at its hypothetical maximum limit, bitcoin would only be able to support 27 transactions per second.

Juels says the current debate over block size overlooks bitcoin’s fundamental scaling challenge. He says tweaks to the block can be made as a quick fix, but the digital currency’s system must be completely redesigned in order to compete with major payment methods.

“The question isn’t what happens in the next year, but what happens in two or three year,” says Juels. “And that’s going to affect if Bitcoin becomes adopted as a mainstream currency or if cryptocurrency in general begins to wither.”