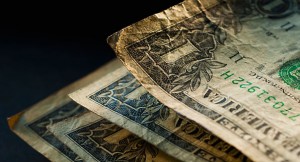 There is a new spin on the phrase “dirty money.” Researchers at New York University’s Dirty Money Project have found 3,000 different types of bacteria living on one dollar bills that were collected in New York. The researchers could only identity around 20% of the non-human DNA that was found. Surprisingly enough, this is because rest of the 80% microorganisms haven’t even been cataloged yet, by the genetic data banks.

The most common type of bacteria that was found is one that actually causes acne. According to the researchers, the other types have been linked to food poisoning, staph infections, gastric ulcers, and pneumonia. Some of the bacteria had genes that can resist antibiotics which can cause further health complications during sickness. The director of genome sequencing at NYU’s Center for Genomics and Systems Biology, Jane Carlton said,

“It was quite amazing to us. We actually found that microbes grow on money.”

The NYU researchers’ findings provide the necessary details for understanding the problem with dirty money. The bacteria isn’t limited only to dollar bills, in fact, other countries also have such dirty money. Oils trapped in skin cells spread germs from one place to another with ease.

Physical currencies do not just stay in one place. When they are traded or sold, the bills go from one person to the next. In this process, germs and bacteria spread from each individual who touches the bill. With digital currencies, this is not the case. When one wants to buy something with digital currencies, all one needs is a personal digital device to process the transaction. The coins then go from one digital wallet to the intended digital wallet, without ever touching any person.

With this in mind, using digital currencies limit the amount of bacteria that is spread when dealing with money. The bacteria in this case will only be limited to one’s own, since the personal digital devices used are only in one’s own possession. With physical dollar bills, the money goes from one person to the next with everyone physically touching the bill and leaving behind those pesky little germs! Who knows what people do with their hands?

Therefore, using Bitcoin and digital currencies is definitely healthier and safer alternative to the dollar bills.