The Antagonist of Bitcoin

I ask blockchain expert and Bitcoin-skeptic Bryce Weiner to interview at his establishment, Groove Coffee, located in northern Kentucky-Cincinnati, USA. We talk about alternative crypto networks, DNMs, and his upcoming innovations. We also get to the bottom of that Twitter ISIS Bitcoin tipping incident. His whitepaper, “Thinking in Blockchains” can be found here. 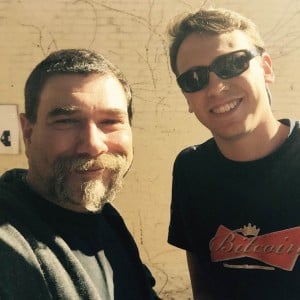 Bryce and I have an esoteric, and funny, similarity. We mutually disdain Romanian cryptographer Mircea Popescu. This is how we start our conversation. While sipping espresso cubano on the sun-drenched deck, I try and comprehend the immensity of Bryce’s newest plans. Between long drags of American Spirit cigarettes and quick sips from an old-style, glass Coca-Cola, he spends nearly two hours talking.

We talk about the eight crypto-coin networks he helps maintain. Unobtanium, a SHA-256 “proof of work” coin, is the most popular of those networks. Unobtanium (UNO), according to Coinmarketcap.com, has a market capitalization of $620,000. “It never goes down!” says Bryce, referring to the BTC/UNO exchange rate. “That’s the thing people love about UNO. It never goes down.” Another well-followed project, Razor (trading as RZR), has a market cap of $13,500. In development, is a decentralized darknet market (DNM) using the RZR coin. “I design blockchains to have purpose. I want the open-source, decentralized DNM to succeed so I can use my RZR coins to buy weed,” quips Bryce. He plans to market these coins on his cryptocurrency exchange, Altmarket.com.

Bryce tells me he wanted to be a clinical psychologist before he discovered blockchains. “I’ve developed what I call a Bitcoin Circadian Rhythm. I’ve noticed my body has begun aligning itself with the 10-minute block time of the Bitcoin Blockchain.” In the future, he plans to apply for grant money to better develop the theory. Speaking of psychology, he laments to me his misunderstood relationship with Brock Pierce, managing partner at Blockchain Capital and former cinema personality. “I want to move on from this High School mentality we have among Bitcoin circles.” He says that his strong opinions as an anti-Bitcoin personality have actually made the Bitcoin network stronger and more resilient.

I find that Bryce’s Bitcoin skepticism comes from pretty technical understanding of blockchains and their problems with scalability. I do think, however, that he doesn’t fully understand the network effect of Bitcoin. I believe the cryptocurrency has utility, especially as a transactional unit. The broad and decentralized peer to peer network of Bitcoin exchangers, which can’t be quantified using simple market capitalization, is something he never mentions.

About halfway through the conversation Bryce hands his barista/assistant a handful of single Dollar bills and asks her to fetch another pack of cigs. This marks the turning point when the focus shifts to a new project, EVUE. He tells his EVUE dream of a RIAA-approved blockchain system that will allow users to keep track of digital content and freely transfer it via internet platforms (i.e. Spotify, iTunes, Windows Media). “People will be able to keep their digital content for life,” he says. The project will be a massive undertaking requiring a large seed investment. “Our options are the venture capital community or a controlled crowd-funding,” he hasn’t decided how he will progress.

We talk about the ISIS incident to end the conversation. February 28th, micropayment service ChangeTip blocked Weiner’s attempt to send $1 to a suspected ISIS account over Twitter. Soon after, he says he voluntarily deleted his Twitter account, re-activating it later. “Twitter was complying with the US Patriot Act to destroy ISIS communication. They were purging the whole system of ISIS accounts.” The incident further cemented his status as an anti-Bitcoin rebel. However, Bryce will tell you reputation never really matters, anyway.

Will BitSeeds (XSEED) Germinate, or Terminate?