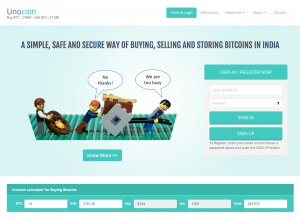 Bangalore, Karnataka, India-based bitcoin startup Unocoin said in a press release sent to CoinReport that it has raised US$1.5 million in venture capital in a pre-series A round, the highest total raised for a cryptocurrency venture in the history of the world’s second most populous country.

“We’re honoured to have this type of support from top investors,” said Unocoin co-founder and CEO Sathvik Vishwanath in the press release. “We started from my small hometown called Tumkur near Bangalore and our goal from the beginning was to make it easy to get bitcoin in India.  A few years later, we are now headquartered in Bangalore with 30+ employees, serving more than 100,000+ customers across the country and growing exponentially. Given our steep growth rate, we’re looking to serve millions more in the coming years.”

“These are exciting times,” Vishwanath continued. “India has the largest gold, inward remittance, and IT markets in the world, all of which make it a perfect home for Bitcoin and blockchain technology.”

In addition to bitcoin buying and payment processing services, Unocoin offers bitcoin selling and storing (wallet and vault both) services as well.

“We believe that we’re at the dawn of a new evolution where money itself is being reinvented. We love seeing so many of the smartest cryptographers, mathematicians, and computer scientists from all over the world working together to scale Bitcoin to the masses. Over the past year, we’ve also been innovating at light-speed: we’ve recently launched a merchant point-of-sale (POS) app, a mobile trading app, an auto-selling feature for remittance users, systematic investment planning (SIP) to mitigate against volatilty risk, integration with NETKI to simplify Bitcoin addresses, created an over the counter (OTC) desk for large traders, integrated with purse.io for discounts on Amazon, launched an API for developers and more. Over the coming months and years, we’ll continue to build practical, useful features and tools on top of Bitcoin,” said Vishwanath.

Unocoin’s mission is to bring bitcoin to billions of people.

Sunny Ray, Unocoin’s co-founder and president, said, “We started this company with the mission to bring bitcoin to billions. Bitcoin opens up a world that simply wasn’t possible before.  When we got started four years ago, we saw a once in a lifetime opportunity to build out a secure platform for people to easily access bitcoin. Empowered with our current round of financing from many of the best investors in the world, we believe that Unocoin is strategically positioned to reach millions of people in the next few years. In the future, we believe that bitcoin has the potential to take market share from gold, substantially reduce the cost of remittance and potentially bank the unbanked.”

Unocoin says it believes in being self-regulated and has therefore designed its own AML (Anti-Money Laundering) and KYC (Know Your Customer) policy, according to which the firm obtains certain identification documents, including a copy of PAN card and address proof, from every customer in order to avoid its website and services being used for money laundering and other illicit purposes.

“We were also the first Bitcoin company in India to implement a comprehensive compliance and banking like framework […],” said Ray.