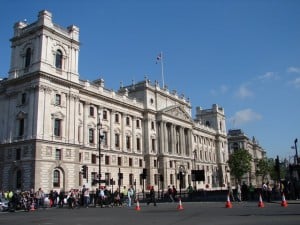 UK Treasury Buildings The offices of H.M. Treasury in Whitehall.

In a report published along with the release of the UK’s 2015 budget, the Treasury said the new regulation would support innovation and prevent criminal use of cryptocurrencies, reported Reuters.

The news agency said the government will collaborate with the British Standards Association to produce a set of standards that will protect consumers. The Treasury also announced a new research initiative on cryptocurrency technology, stating it would allocate an additional £10 million to the area.

The Wall Street Journal reported that the Treasury plans to launch a consultation later this year to gather views on how the regulation should be designed, including its scope and how current anti-money laundering rules should be specifically applied to the sector.

The Wall Street Journal said the consultation will also look to gather opinions on how to make sure that law enforcement agencies have the necessary skills and tools “to identify and prosecute criminal activity relating to digital currencies, including the ability to seize and confiscate digital currency funds where transactions are for criminal purposes.”

The UK Treasury’s report is the result of a call for information the ministry issued last fall to assess the assets and liabilities of digital currencies.

The report notes that respondents to the Treasury’s call for information outlined a number of prospective benefits that digital currencies could offer to consumers, companies, charities, and the wider economy as a payment method. At the same time, respondents noted that digital currency systems, as currently designed, have some inherent flaws that make them volatile and potentially unsuitable for mainstream use. Other respondents concentrated on the risk that cryptocurrencies are an enabler of crime, a matter that is high on the government’s agenda.

The report notes that while there are clear obstacles to digital currencies gaining widespread use in their current form, the distributed ledger technology underlying cryptocurrencies has significant future promise as an innovation in payments technology. The report says the government wishes to encourage a supportive environment for the development of legitimate businesses in the digital currency sector so that the UK can reap some of the benefits of digital currencies, while also deterring illegal activity.

Deep-web market Evolution Marketplace disappears with millions worth of Bitcoins