Napa Valley, California-based blockchain solutions company Tokenly announced in a press release CoinReport received that it will launch the initial trial of its blockchain-based direct-to-fan music platform, token.FM, in early May. The firm also announced a Series A funding round.

Tokenly is a blockchain solutions company that concentrates on practical business applications of bitcoin, blockchain and tokens. Its token.FM platform is the world’s first project to take advantage of the blockchain technology to deal with current media challenges and enable a new future of media distribution and fan relationships.

Using token.FM, artists can be in charge of their pricing, distribution and revenue splits for sales and streaming and earn over 20 times the income potential of today’s “major” streaming platforms, said the press release.

The platform, added the release, also offers ground-breaking ways for artists to work together with other artists and brands, to connect with fans directly and to own those worthful connections. Fans also get to support artists directly, enjoy exclusive experiences and benefit from true ownership (i.e. the ability to collect, buy, lend and resell). In addition to streaming, explained the release, an album could be available in limited volumes and allow access to exclusive artist experiences or chats, merchandize or ticket pre-sales and even potential for rental-earning.

“token.FM is all about deepening the relationship between artists and fans while restoring the sense of music ownership that has been largely missing from the digital music experience,” said Tokenly CEO Adam B. Levine.

“Now, artists can fully control the distribution of their music and see exactly who their most devoted fans are, rewarding them with exclusive perks. Meanwhile, fans enjoy full ownership of the music they purchase and a closer relationship with their favorite artists and fellow music lovers. In the end, it’s all thanks to the power of the Blockchain, which we are thrilled to take beyond the stage of conception and concretely apply to direct-to-fan music sales for the very first time.”

On token.FM, artists can effortlessly tokenize any number of songs into a digital package and lay precisely the terms they wish for that package, including pricing and quantity for limited/exclusive releases. Moreover, artists can include incentives like VIP experiences, merch discounts, access to private chats and more. Fans who buy an album via token.FM get not just the true ownership of that album (including the ability to trade, sell or lend it), but also the various incentives accompanying that package. Blockchain technology identifies each sale directly with its owner. For example, if someone is the fifth individual to buy an album, they will always own the fifth distribution of that album. This will enable the music itself to function as the key for access to exclusive on- and off-line meetings with the artists they love. Media creators are compensated directly and transparently for all sales. 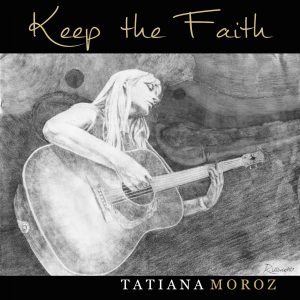 The first artist to utilize the platform is singer/songwriter Tatiana Moroz, whose full catalog, including her latest album, Keep the Faith, is available as both traditional MP3 downloads and “tokenized” albums. The press release notes here that buyers of a tokenized album get unlimited streaming rights to that album on the platform and access to an exclusive chat room.

Tatiana has also created a “Super Tatiana Fan” token, which grants access to all of her albums, enabling her to pre-sell albums or set up a backer subscription model. This Super Fan token can grant access to a growing and changing library of media and incentives over time.

“Using token.FM allows me to reward my fans for their goodwill and sharing, which in turn will help me win more fans as they become more engaged and spread the word to their friends,” said Tatiana. “This is a great way to get all the benefits the Blockchain technology provides without requiring a deep understanding of Bitcoin or any of the administrative burden.”

Fans on token.FM who don’t wish to purchase an album can stream that album’s songs using the platform’s jukebox-style credits. Subject to the artist’s preference, songs can be streamed for free, 2.5 credits (about 2.5 cents) or for another price set by the artist. Artists keep 80% of profits, which, together with the jukebox model, allows for 20 times more earnings than many other platforms.

Pre-registration is open on the platform, which will offer free plans for both fans and artists. Early users will be entitled to long-term exclusives and perks. token.FM is created with an “abstract away, opt-in” approach, which means neither fans nor artists need bitcoin or a bitcoin wallet to enjoy core features.

token.FM logo – Via the press release we received

Keep The Faith cover – Via the album press release