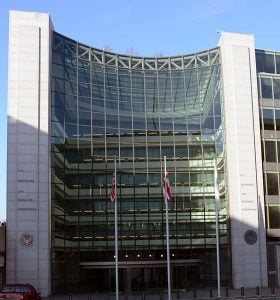 Independent United States federal government agency the Securities and Exchange Commission (SEC) announced in an email it sent to CoinReport the impermanent suspension, following Section 12(k) of the Securities Exchange Act of 1934 (the Exchange Act), of trading in the securities Bitcoin Tracker One (CXBTF) and Ether Tracker One (CETHF) starting at 5:30 p.m. EDT on September 9, 2018, and ending at 11:59 p.m. EDT on September 20, 2018.

CXBTF became the first bitcoin-based security available on a regulated exchange when it listed on NASDAQ/OMX in Stockholm, Sweden, back in 2015. American investors first accessed it just on August 15.

CETHF, on the other hand, became the first publicly traded, ether-based security available on a regulated exchange when it listed, again, on NASDAQ in Stockholm in 2017. U.S. investors first accessed it also in August this year.

In a suspension-announcing press release on its website, the SEC explains the reason for its decision, saying there is a lack of current, consistent and accurate information regarding CXBTF and CETHF resulting in confusion amongst market participants about these financial instruments.

Giving an example, the SEC says the broker-dealer application materials submitted to allow for the offer and sale of these financial products in the United States, as well as particular trading websites, characterize them as “Exchange Traded Funds.”

As another example, the SEC mentions the characterization of the instruments as “Exchange Traded Notes” by other public sources.

By contrast, adds the SEC, the issuer characterizes them in its offering materials as “non-equity linked certificates.”

The release notes that during the period of the trading suspension, a broker-dealer may engage in activities within the U.S. only to assist non-broker-dealer customers with the liquidation of owned positions held as of the date of the suspension in a transaction (or series of transactions ending with a sale) effected on the NASDAQ Nordic or other trading platform located outside the U.S. or with non-U.S. persons located outside the U.S. including the issuer.