According to the news agency, Russia’s finance ministry intends to submit in May legislation that would impose fines of up to 2.5 million rubles ($38,000) and jail sentences of up to seven years on digital currency users.

Bloomberg said the proposed law would bar the issuing of all digital currencies or their use in the exchange for goods and services in Russia. Punishment would start at four years in prison and a half-million ruble fine for individuals, with more severe penalties targeted at executives at financial companies.

“Bitcoin can be used to finance the shadow economy and crimes, and this risk we cannot allow in Russia’s financial system, which we are striving to make transparent and healthy,” said the press service of the country’s central bank in an e-mail to Bloomberg. 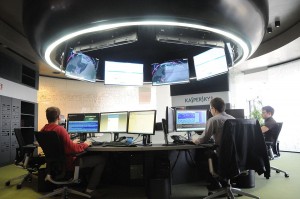 According to Internet security firm Kaspersky Lab, hackers are increasingly demanding ransom in the form of bitcoin. The company’s research observes that the top three origins of attacks by hackers are China, Russia and the U.S. Speaking with Bloomberg, Sergey Lozhkin, a senior research at Kaspersky Lab, noted a ransomware “wave” going on in which hackers infect computer files with encryption software and then attempt to extort bitcoin from victims.

The digital currency accounts for more than 40 percent of criminal-to-criminal payments in the European Union, said a Europol spokesman in an e-mail to Bloomberg.

Lozhkin and other experts say attempts by Russia or any other nation to ban bitcoin will not work.

“A ban would be impossible to enforce because it is a peer-to-peer technology, it is a file sharing technology, and all people need to do to get around the ban is to have computers with an Internet connection,” said Bitcoin Foundation Founding Director Jon Matonis to Bloomberg. “This perspective is out of step with the rest of the world. It’s like worrying about gravity, what can you do?”

In its article, Bloomberg goes over Russia’s economic woes. Since the collapse of the Soviet Union, Russia has struggled to instill confidence in the ruble and restrain the once-common practice of Russians demanding payment in foreign currencies such as the U.S. dollar. A decade ago, the government removed capital controls limiting cash outflows, and in 2014 the Bank of Russia started letting the ruble’s value be set nearly entirely by the market. Last year, the central bank withdrew the licenses of 34 lenders for reasons such as allegedly violating laws banning money laundering and financing terrorism.

In an interview with Bloomberg, Deputy Finance Minister Alexey Moiseev said, “We can see how swiftly, pretty much over the course of the year, this became a reality of our economic life.” Bitcoin, which is not controlled by any government or a central bank, is “in its essence is a money surrogate, so ultimately that leads to the central bank losing control over the money supply,” said Moiseev.

However, Russia does have a favorable view of the blockchain; the technology is “promising” and has a “great future,” said Moiseev to Bloomberg.

News of the proposed legislation follows reports last week stating that Russia is interested in creating a national digital currency and blockchain technology.

Russian flag – Public domain image (This work is not an object of copyright according to article 1259 of Book IV of the Civil Code of the Russian Federation No. 230-FZ of December 18, 2006)