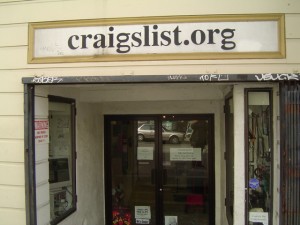 When discussing the strength of the Bitcoin economy, Craigslist is often overlooked. Other metrics have been used to argue the merits of the currency. The currency exchange rate seems to be the most popular. Some think the number of block chain transactions reflect Bitcoin’s utility. Others think search engine analytics show correlations between web searches, Bitcoin price, transaction volume, and overall success. Some look to the number of Bitcoin core client downloads.

I’m proposing a different indicator of Bitcoin’s success: Craigslist. Critics argue that Bitcoin has no intrinsic value; that there are no merchants that accept it; and those that do immediately liquidate it for a more stable store of value (i.e. the US Dollar). However, data gathered from Craigslist argues otherwise. There are thousands of small sellers accepting Bitcoin across the United States. They comprise a massive peer-to-peer network that has largely been ignored. To prove my point, I aggregated all the Craigslist listings that featured the word “Bitcoin” and calculated their dollar value. My sample was the Craigslist pages of the ten largest cities in the United States (New York, LA, Chicago, Dallas, Philadelphia, Houston, Washington D.C., Miami, Atlanta, & Boston). I created a spreadsheet to divide goods by category. I calculated a total sum of goods for sale for each city. My mind was blown.

Electronics are the most popular items for sale for Bitcoin on Craigslist at 30% of all listings. Someone looking to spend Bitcoin can find everything from a MacBook Air to a Canon GL1 digital camera. Five percent of the listings are automobiles and motorcycles (including a fully restored 1970 Plymouth Barracuda for $57,000). About 20% of the listings are for mining equipment. The majority of this equipment is SHA-256 ASIC machines, used to mine Bitcoin. The average cost of this equipment is $0.25-$0.75 per GH/s (gigahash per second). These prices are substantially higher the average cost of a GH/s cloud contract on CEX.io at $0.18 (perhaps this explains the large supply not yet sold). High-traffic domain names make up 25% of listings with the most expensive, thecloudtrade.com, being listed for $198,000. The remaining 20% of listings include everything from concert tickets to Dallas Cowboy furniture sets. In summation, the total amount of goods for sale in the 10 metro areas I surveyed was approximately $546,000 (2,367 Bitcoin). Something that I did not include, but is worth mentioning, were advertisements to buy or sell Bitcoin. In a previous article, I wrote about the growth of decentralized exchanges. By allowing users to post service ads, Craigslist acts as a decentralized intermediary for people wishing to buy and sell Bitcoin.

For the critics, the naysayers, and the pundits: look to Craigslist. It is reasonable to assume that if ten cities in the United States have greater than a half million US dollars’ worth of goods for sale in Bitcoin, the global Craigslist Bitcoin economy is much, much larger. Unconventional economies require unconventional insights.