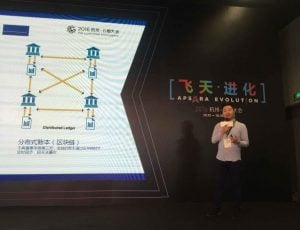 Ali Cloud gains a bottom-layer framework, including the open-source blockchain proficiencies, which enable any business to modify its own enterprise-level blockchain with adapted functionalities, from Onchain.

One of the most commonly utilized communication tools in the corporate world, email is used as evidence in courtrooms and is recognized by judiciaries. However, until now, it has been problematic to pull out original email files as digital evidence due to the time, resources, inter-departmental cooperation and technology needed.

Ali Cloud’s blockchain-based email evidence repository will enable users to synchronize and store vital data (along with hash values) of significant emails to third parties. Users, in case of dispute, can download the emails in question and send them to judicial departments, which can then review the emails and their data to develop reports as evidence in a courtroom.

Da Hongfei, CEO of Onchain and founder of Antshares, said in the release we received, “Blockchain technology is expanding into more territories due to its high efficiency, advanced security, functionality, and low cost. This combination of blockchain technology and digital evidence storage will completely alter the landscape of traditional evidence storage, bringing more efficiency and security.”

Onchain recently received the Award for Excellence in Innovation in Blockchain Technology from Frost & Sullivan. It was also named a KPMG China Leading Fintech 50 selection.