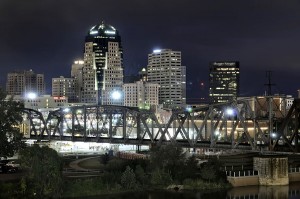 Downtown Shreveport, LA as seen from the Bossier City bank of the Red River.

A father and son pleaded guilty Tuesday to funneling money through an unlawful bitcoin operation, said the United States Attorney’s Office for the Western District of Louisiana in a press release.

According to the guilty plea, from at least 2013 to 2015, the Lords were accepting currency, money orders and MoneyPaks and exchanging those funds for bitcoin. Contrary to law, the men were not registered with FinCeN or licensed by the State of Louisiana to operate as a money service business. They also failed to report the receipt of more than $10,000 in U.S. currency.

Both men face five years in prison for the conspiracy count, and Michael Lord face a five-year prison sentence for the drug count. The Lords also face three years of supervised release and a $250,000 fine. They are scheduled to be sentenced on August 1, 2016.