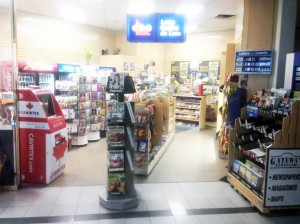 CAVIRTEX, a Canadian Bitcoin exchange based in Calgary, has installed a Bitcoin ATM, or BTM, in London, Ontario. The machine is the first of its kind in the city and in Southwestern Ontario.

CAVIRTEX has a partnership with Gateway Newstands, which provides locations for a number of the company’s BTMs, including the London BTM installed in Gateway convenience store in the Talbot Centre downtown.

The location for London’s BTM is “a natural fit,” said Kyle Kemper, CAVIRTEX’s vice president of business development, to the Londoner. “It’s downtown, it’s in a place that’s accessible during extended business hours (and) it’s in a high traffic location.”

A high-traffic area is one factor which CAVIRTEX considers in deciding where to install a BTM. In an interview with CoinReport, Kemper said other factors the company explores include proximity to other BTMs, available in-store real estate, and accessibility and free parking. “Our goal was to make these BTMs accessible and safe for everyone to use,” he said.

Kemper described to CoinReport how CAVIRTEX’s partnership with Gateway as a BTM host came about, saying:

“We tried working with malls and larger property management companies but they are slow moving. Gateway as an organization was looking for ways to innovate as their core business lines of magazines and newspapers can be considered on the decline in this digital age. They already had hundreds of excellent locations and were open to working with us so we jumped on it.”

The London BTM is part of CAVIRTEX’s national rollout of BTMs. Other machines can be found in Toronto, Mississauga, Ottawa, and Vancouver. The company had a machine installed in Niagara Falls, but had to remove it because according to Gateway’s lease agreement with Casino Niagara, the convenience store was not permitted to have the BTM.

Asked what feedback CAVIRTEX has received from Gateway executives and franchise owners about the BTMs, Kemper told CoinReport that so far there haven’t been many issues.

“When I was installing the machines I educated the store owners on what Bitcoin is and how the machines work. We also provided them with pamphlets to give to curious patrons covering the 5 W’s of Bitcoin. At an executive level they were thrilled about the PR and marketing we attracted for them surrounding the launch.”

In an email to CoinReport about the new BTM in London, Kemper said “given London’s reputation as a hotbed of innovation we’re excited to be making Bitcoin, the future of money, available to residents and students” in the city.

“Students and innovators will be key to furthering the industry and given Bitcoin’s open decentralized/distributed nature, there are infinite possibilities for additional innovation and improvement.”

Kemper explained to CoinReport how he sees students being a driver for Bitcoin, saying:

“Students are the present and the future. They are trendsetters, mining canaries, and innovators.  Discussions about Bitcoin and the future of money are taking place on campuses across the planet. Given the scope of opportunity with Bitcoin it seems like a natural fit for brainstorming and opportunity recognition by students and professors alike. Their participation is key to Bitcoin’s enduring success.”

Elaborating on this endeavor, Kemper told CoinReport that in the next couple of weeks CAVIRTEX will install a BTM on the campus of Dalhousie University in Halifax, Nova Scotia. Kemper said Dalhousie will be the first Canadian university with a BTM on campus, and that the company is partnering with the Dalhousie CryptoCurrency Club on this launch.

When it comes to businesses in London, finding one that accepts Bitcoin is still uncommon, but ATMOS Marketing is receptive to the idea, reports the Londoner. The digital marketing agency announced in May that it would start accepting Bitcoins as a form of payment.

“So far, our experience with Bitcoin has been that businesses are intrigued by it, and want to know more about how it works, but aren’t quite ready to adopt it yet,” said ATMOS Marketing co-founder Corey Dubeau. “Much like we do with digital marketing, we’re helping educate others about its benefits.”

As for what it will take for Bitcoin to grow, Kemper told CoinReport that education is a key first stage.

“There are many myths surrounding Bitcoin and people often sensationalize negative stories versus promoting positives and the grander picture. This is like the railroad; when it first came about many people were against it and constantly focused on crashes and safety risks as reasons to dismiss it. In retrospect we see that the railroad fundamentally changed the way that transportation works. I see Bitcoin doing to currency and value transfer what the railroad did to transportation. The first step is education and I recommend that everyone do their research, ask questions, go-to meetups and come to their own conclusions. There is a reason that some of the smartest minds on the planet are going all-in on Bitcoin.”