LinkedIn’s now-former head of sales solutions for the Middle East and North Africa, Dylan Sharkey, has joined the IUNGO Network board of directors as a senior advisor to the executive team, according to an IUNGO press release CoinReport received.

Sharkey explained his reason for joining IUNGO, saying that following a successful career at LinkedIn and productive investments in several projects around Europe, he was very choosy with the startups he joined. 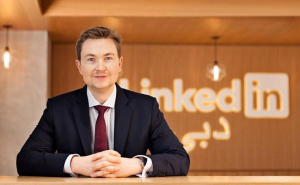 “What attracted me was the strong management team that has executed successfully on multiple ventures, combined with the technical genius and vision of the CTO Andrius Mačys,” said Sharkey in the press release we received. “On top of this, the tremendous business opportunity to disrupt the Global ISP market using blockchain powered technology proved frankly irresistible.”

IUNGO Network CEO Ričardas Bernotavičius commented that Sharkey “joins with invaluable experience of contributing to the stellar growth of LinkedIn when it was still a fast growing startup before the successful IPO in 2011.”

Sharkey worked at LinkedIn’s EMEA HQ in Dublin, Ireland, before he was tasked with launching the Dubai office as employee number two and scaling it up to more than 100 employees in the Middle East today.

Sharkey holds a business degree from the prestigious Trinity College Dublin. Having worked at Enterprise Ireland in Dubai, the commercial division of the Irish Embassy in the UAE, he also brings profound governmental sector expertise as well as broad business and investment experience dealing with Japan, the UK and Central Europe.

He further adds extensive experience in sales management, enterprise and government partnerships, recruiting top talent and scaling profits in hyper-growth startup environments. He will utilize this at IUNGO by advising management in these domains, thus assisting in creating a superior team while scaling the commercial side of the business so that they can launch post ICO and fast-track through their technology and revenue landmarks.

Most ISPs and telecommunications firms are regionally established, offering no convenient services for today’s new generation of vloggers, freelance workers, travelers, digital nomads, etc. It becomes a huge issue for them to access sufficient and reliable Internet services when they are abroad. Problems like WiFi password hunting, filling forms at airports and in public spaces, unidentified security or payment methods, poor download and upload speeds and data usage restrictions don’t just cause inconvenience, but a quantifiable and material waste of time, energy and money. A global ISP could be the solution. This is how the IUNGO vision was born, says the press release.

IUNGO is an internationally distributed wireless Internet service provider created with the help of a global community. They are building a community where anyone can shoulder responsibilities for running parts of the service delivery infrastructure and profit from the accompanying rewards. To contribute, members will install public WiFi access points on their premises and/or run parts of the service infrastructure.

To carry end-user traffic, IUNGO Network will depend on on the current physical Internet infrastructure and develop an overlay network with unified end-user identification, authentication and billing systems. The blockchain startup will leverage the Ethereum network to create trusted, transparent accounting and payment setup. Mobile apps will allow low granularity service usage accounting and compensation for services rendered. In addition to the software solution, hardware will be provided as an option, with pre-setup routers being available for those looking for a consumer-friendly plug-and-play experience.

The IUNGO team will be responsible for not only technical research and development required to deploy the network internationally, but also for forming global recognition of the brand.