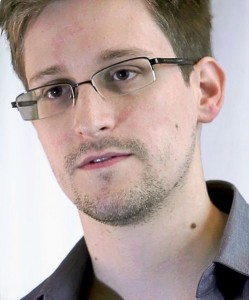 Edward Snowden – Screenshot of the film ‘Prism’ by Praxis Films

Courage Foundation, which manages Snowden’s legal defense, has set up a website – edwardsnowden.com – where individuals can donate to support him through a number of methods, including Bitcoin. On the site’s “Donate” page, people wishing to contribute using the digital currency can select the Bitcoin tab to send donations to a dedicated Bitcoin address.

The foundation says it also “organises and maintains a dedicated campaign team to publicise the issues [Snowden] disclosed, advocate across global media and build the Snowden support network around the world,” reported the International Business Times.

Currently living in Russia, Snowden is wanted by the US on charges of espionage and theft of government property after leaking millions of classified documents that revealed mass surveillance programs of the NSA and the UK’s Government Communications Headquarters such as phone tapping and snooping on online activities.

The leaks spurred international criticism of the Obama administration, as the documents revealed that the NSA tapped phone conversations and spied on the online activities of prominent individuals such as German Chancellor Angela Merkel and Brazilian President Dilma Rousseff.

The International Business Times reported that Snowden has said he wanted to return to the States, and questioned the charges, justifying his real intentions behind the leak.

John Kerry, US secretary of state, has asked Snowden to “man up” and return to the States to “stand in our system of justice and make his case.” Hillary Clinton, Kerry’s predecessor, has also stated that “I’m aware of as a former lawyer that he has the right to mount a defence.”

However, WikiLeaks founder Julian Assange has said that Snowden will not be able to conduct a “meaningful” defense against the US government if he returns to the States, stating “that’s just a sad reflection of how the federal court system has evolved in relation to national security cases.”