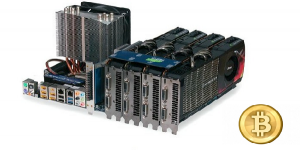 Bitcoin mining operations are slated to spend at least $600 million to deploy infrastructure in the second half of this year to process transactions using the digital currency, reports Data Center Knowledge.

That investment will continue into next year, according to panelists at last week’s CoinSummit in London. A significant amount of that spending will benefit data center providers with clients in the digital currency realm.

The panelists say their projections are based on the math.

Dave Carlson, founder of MegaBigPower, a Bitcoin operation based in Washington state, said:

“It comes down to the financial incentives. Over the next two years there will be 2.6 million Bitcoin mined.”

At a price of approximately $630, that measures to at least $1.6 billion in Bitcoin that will be garnered by mining operations through “block rewards,” which is an incentive paid out every 10 minutes for using their computers to process transactions on the Bitcoin network. If the price increases, as is expected by many Bitcoin miners, that opportunity will be even greater, says Data Center Knowledge.

The rising interest in Bitcoin and other cryptocurrencies has sparked massive investments in servers and infrastructure to process transactions. Computing power in digital currency is measured by the “hash rate” – the number of Bitcoin calculations that hardware can compute every second. Since January, the Bitcoin network has expanded from a total compute power of 10 petahashes per second to 135 petahashes per second.

The CoinSummit panelists expect that growth to continue through the autumn, resulting in a year-end hash rate of between 400 and 700 petahashes per second. Deploying a petahash can cost between $1.5 million and $2 million, depending on where the capacity is deployed.
That suggests new investment ranging between $600 million and $1.4 billion by the end of the year. The industry’s key players are already growing their infrastructure.

“You’ll see some announcements from us shortly on data centers we’re opening. I think that will be a differentiator in the near future.”