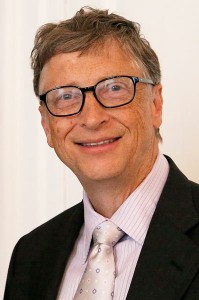 In an interview today with Bloomberg, Bill Gates made several, largely positive, comments about Bitcoin. When asked about the currency and its low transaction fees, Gates said,

“Well, Bitcoin is exciting, because it shows how cheap it can be. Bitcoin is better than currency because you don’t have to be physically in the same place, and, of course, for large transactions, currency can get pretty inconvenient. The customers aren’t trying to be anonymous, you know, they’re willing to be known, so Bitcoin technology is key, so you could add to it or build a similar technology, where there’s enough attribution that people feel comfortable that this is nothing to do with terrorism or any kind of money laundering.”

This gives an interesting view of the philanthropic perspective on Bitcoin. While it is disappointing that Gates implicitly dismisses the value of privacy as a human right, that perspective is understandable when viewed through the lens of Gates philanthropic work. Gates, through the Gates foundation, deals on an admirably utilitarian basis with a number of extremely serious problems, such as the epidemics of HIV, malaria and tuberculosis.

Compared to these massive issues, the death tolls of which number in the millions annually, the issue of privacy might seem unimportant compared to the aspect of Bitcoin that appeals to him personally – namely, its ability to reduce the cost of international money transfers, which represent one of the primary ways that money flows into poor countries, in the form of cash wired back home by workers living abroad in wealthier nations. As matters stand, the cost of sending small amounts of cash via wire transfer services like Western Union can cost users 30% or more in fees.

It’s not unlikely that at least part of what Bill Gates is talking about will come true: Altcoins will emerge that have strings attached and intentionally give up many of the anonymous aspects of Bitcoin, and may well have a role to serve in greasing the path for Bitcoin or other, even more anonymous cryptocurrencies to go mainstream. However, in the end, I don’t think it is these hobbled currencies that will win the day. It is my suspicion that, in the end, people really do value privacy, and the market will eventually choose the option that offers these things.